Call it an anticlimax.

Other cryptocurrencies in the top 10 most-traded cryptocurrencies were a mixed bag. Six showed marginal to average gains while others lost value. Bitcoin rival Bitcoin Cash drew strength from bitcoin’s losses, rising by 16% in the last 24 hours to trade at $2,159.60, as of this writing. Bitcoin cash, which has minimal transaction fees and comparable rewards as compared to bitcoin, has also gained an edge over the original cryptocurrency among miners.

Cardano, a three-month-old cryptocurrency that racked up gains of approximately 390 percent over the weekend, reversed course and was trading at $0.47, down by approximately 6% in the last 24 hours. In a couple of tweets earlier, Litecoin founder Charlie Lee had expressed concern about Cardano’s valuation. 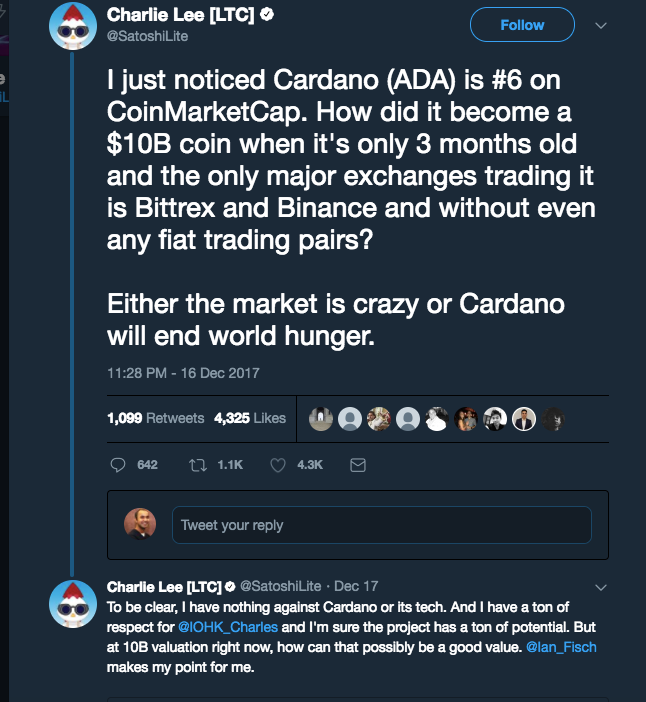 At 14:43 UTC, the overall market capitalization for cryptocurrencies was $591.1 billion.

Matt Osborne, chief investment officer at Altegris, said CME may attract more traders because its bitcoin futures are based on “a broader array of exchanges.” Bobby Cho from Cumberland Mining provided additional perspective. According to Cho, the spot market dictates futures trading prices “just because of sheer volumes (in trading).”

This means that new valuations for bitcoin should come in handy for futures traders. Ronnie Moas, founder of Standpoint Research, had predicted a price target of $5,000 for bitcoin, when it was trading at $2,600. (See also: Is Bitcoin On Track To Surpass Apple's Market Cap?) This morning, he told CNBC that bitcoin will touch six figures and become the world’s most valuable currency.

According to Moas, bitcoin is similar to e-commerce behemoth Amazon.com Inc. (AMZN) in that it is a long term buy. “The way to play Amazon for the last 15 years was to buy it, hold it, and add on the dips," he said. "That's exactly the way I think people should be playing bitcoin."